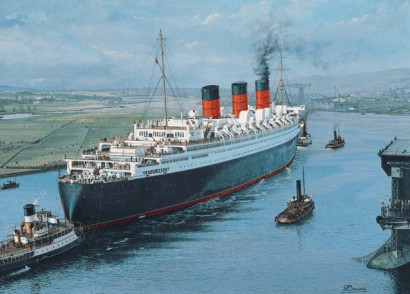 Like few other liners before or since, the majestic Queen Mary earned a special place in transatlantic maritime history and in the hearts of ship-lovers the world over. Launched in 1934, the Mary was regarded with great pride and affection, her existence seen as Britain's symbol of triumph over the adversity of economic depression. Around one million admirers lined the banks of the Clyde on 24 March 1936, as the world's largest liner bade farewell to John Brown's shipyard in Clydebank. With, at some points only 1.2 metres (4 feet) of water under the giant vessel's keel, Queen Mary travelled light with lifeboats, fuel and internal furniture kept to a minimum. Surviving the brief drama of a potentially fatal grounding during her tortuous fifteen mile journey to the sea, the proud Cunarder safely dropped anchor off Gourock four hours later. Her legendary career had truly begun...

On Queen Mary's bridge that historic day, proudly, though slightly apprehensively, stood one of her chief designers, a young naval architect coincidentally named John Brown. Along with one other chief designer, he had been honoured with the responsibility of converting Cunard's specifications into working drawings for the world's most famous liner. All this took place in secret, locked away out of sight in a small upstairs office in the shipyard at Clydebank.

Sixty years later, Gordon Bauwens had the great honour of personally presenting Dr John Brown with limited edition print number 534. Chosen to match the Mary's yard number, this print was presented on behalf of the Institution of Engineers and Shipbuilders in Scotland (IESIS).

Foot Note: During his outstanding career John Brown was personally involved in the design and production of over 400 vessels, including the three Cunard Queens, Caronia and the Royal Yacht Britannia. He ultimately became Managing Director of the yard to which he had dedicated his entire working life. In his 99th year, in 2000, Dr Brown received due recognition by being honoured with a knighthood. Sadly Sir John enjoyed his new title for less than a year. He died peacefully in his own home in Glasgow on 27 December 2000, just a few months short of his hundredth birthday. The quiet man 'who drew a legend' lives on in our memories and in his achievements as a legend in his own right.